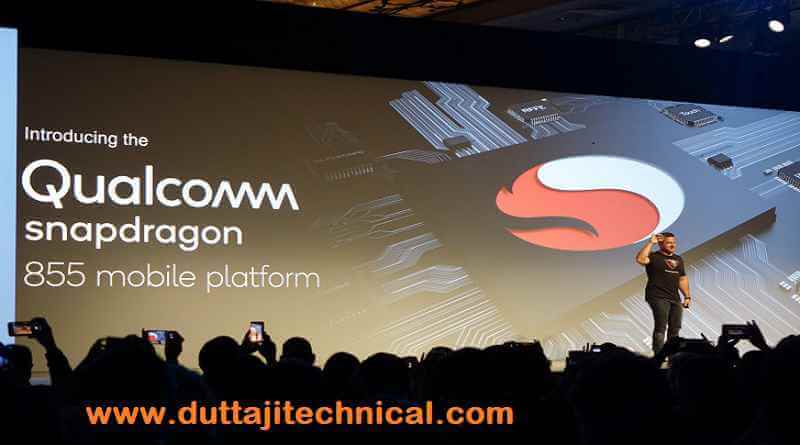 It contains a better CPU with a better GPU and much more. So I’m gonna split this blog post into five mini different sections. It’s Qualcomm first 7 nm chipset. It has Qualcomm® Kryo™ 485 CPU.

Which is powering most 2018 flagships and then adding a whole another Snapdragon 855 on top of that in terms of performance?. It has Qualcomm® Kryo™ 485 CPU.

For the GPU or graphics processing unit the Snapdragon 855 uses the Adreno 640. Which is a more conservative upgrade with improvements. Pegged at around 20 percent not mind-blowing.

But even the last generation Adreno 630 can still play every current game well and there’s more to it. So Qualcomm is now focusing on what they call the Snapdragon elite gaming experience.

Which is basically a combination of features that this chip supports like cinematic HDR color grading for games and technologies. To reduce dropped frames by 90% so a lot smoother gameplay

The camera with the Snapdragon 855 comes with a massively upgraded computer vision signal processor which is exciting.

You’ll be able to record 4kHDR video at 60 frames per second encode clips into the new HEIF (High-Efficiency Image File Format)  file format which would reduce file sizes by 50%.

The Snapdragon 855 actually has the company’s fourth iteration of the AI engine. But it’s only just starting to get serious when it comes to AI tasks on phones.

With this chip, performance is 300% higher which has some more obvious implications like-new camera shooting options. But also some subtler benefits like noise reduction when talking to your friend.

All your phones will voice assistant from what I’ve seen today the AI here is very powerful enough to upgrade.

The resolution of photos or remove grain or add depth and bokeh effects to images downloaded from the internet.

Consumption witnessing to music watching movies and videos will look better than ever as the chip supports HD 10 plus. But also consume less power than before with more efficient video file formats.

Then we’ve got XR or extended reality which describes virtual reality so powerful. It claims to blur the lines between physical and virtual worlds we’re talking 8k VR experiences.

We didn’t mention that in the 3d sonic sensor. Qualcomm has been working for the last five years on the world’s first ultrasonic in-display fingerprint scanner.

Which can take a 3d image of finger ridges and pause and work through grimy sweat oil. And their new chip works with hardware footprint throughout the presentation.

The Qualcomm Snapdragon 855 will have 5g which. To be honest, is an even bigger deal than 3G and 4G ever. Where the Snapdragon 855 uses Snapdragons X 55 G modem which Qualcomm has been working on seriously since 2015.

Shrinking the physical hardware footprint until we now have something that you could hold with one finger. And in theory, this could mean downloading 4kmovies in seconds. And streaming PC quality games on the go through the cloud. But I say in theory because as with a lot of these things.

We’ll have to wait and see if third-party services can take advantage of it. Also through Wi-Fi speeds are getting a push. This is the industry’s first 802 11 ac why platform.

And what this means speeds up to 10gigabits per second. Which compared to money and current phones on 802 11 AC is almost three times faster.

This is a 7 Nano Meter chip which in of itself means better battery life versus its 10-nanometer counterparts. But there’s more Qualcomm’s got what it calls Cru wireless tech. They do not just reduce Bluetooth latency but targets power.

Through a lot of chips which have for performance cause this one that switches one of them out what they call a prime core. Which is even faster than a performance call, this combined with a whole number of other changes.

OnePlus CEO Pete Lau announced that his own company OnePlus would launch the first phone based on the new
Qualcomm’s Snapdragon 855 processor slated for early 2019.